Strong demand for the Darley stallions at Goffs UK

Two days of very strong trade at the Goffs Doncaster Premier Sale concluded on Wednesday, 24 August, with some outstanding results for the Darley stallions.

Night Of Thunder was responsible for the two highest-priced lots and was leading sire by average.

He topped the first day when Mark McStay of Avenue Bloodstock went to £230,000 to secure the Mountarmstrong Stud-consigned colt out of Pious Alexander, a half-sister to Anthem Alexander and Dandy Man.

Speaking after the sale, McStay said, “We’ve seen what Night Of Thunder can do on the track and they [his yearlings] aren’t going to get any cheaper. He’s a top-class sire.”

Yesterday, Night Of Thunder’s smashing daughter out of Thiswaycadeaux topped both the session and the sale when going to Blandford Bloodstock for £240,000. She was bred by Tally Ho Stud and the dam is a half-sister to G2 winner and G1 performer Red Tea.

There was also success for young stallions Too Darn Hot and Blue Point, who had the joint-highest price for a first-season sire and the highest freshman median respectively.

Too Darn Hot’s top price was £150,000, for the National Stud’s smart colt out of winner and producer Whispering Bell, from the extended family of Flagbird.

Blue Point, whose first yearlings proved extremely popular at Arqana, recorded a top price of £80,000 for his colt out of UAE Oaks-placed Music Chart. He was consigned by Grove Stud and was purchased by Oliver St Lawrence.

The sales action now moves to Baden-Baden for the BBAG Premier Yearling Sale on Friday, 2 September where Blue Point, Masar and Too Darn Hot are all represented. 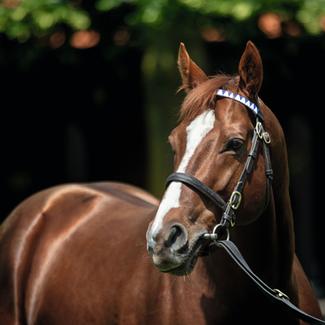