Earthlight to stand at Kildangan Stud

Shamardal’s Champion son to join the Darley roster for 2021

Earthlight, the emphatic winner of the G1 Prix Morny and G1 Middle Park Stakes, has been retired from racing and will stand at Kildangan Stud next year.

The striking son of Shamardal carried all before him during an unbeaten juvenile campaign that saw him win on no fewer than five occasions including two G1 contests.

Stepped up to G3 level for his next start, Earthlight was even more impressive, winning the Darley Prix de Cabourg by four lengths.

Last year’s G1 Darley Prix Morny at Deauville was a truly vintage renewal of the coveted race, with three Royal Ascot winners lining up, together with the Richmond Stakes winner and future G1-winning sprinter Golden Horde. This high-class line up proved no barrier to Earthlight as he outbattled Raffle Prize to record his first top-flight victory. The pair were well clear of the rest of the field.

Next up, Newmarket, and the G1 Middle Park Stakes where Earthlight beat another strong field, this time in a new juvenile course record.

Earthlight was duly crowned French Champion juvenile at the end of this superb campaign.

2020 has of course been an unprecedented year, meaning Earthlight did not make his three-year-old debut until July, where he extended his unbeaten run to six and added another Black Type win to his record in the Listed Prix Kistena. He was then a close fourth (beaten just a length by Dubawi’s Space Blues) in the G1 Prix Maurice de Gheest before successfully tackling seven furlongs for the first time in the G3 Prix du Pin.

Earthlight concluded his career by finishing second in the G1 Prix de la Foret on Arc day, beaten just a neck by One Master. The mare was landing the race for a record third time.

As well as being by sire of sires Shamardal, Earthlight hails from an outstanding female family. His dam was third in the G1 Fillies’ Mile and is herself a half-sister to two G1 winners.

Sam Bullard, Director of Stallions said, “We are delighted to be able to offer Earthlight to breeders in Ireland next year.

“During his unbeaten juvenile campaign, Earthlight’s victories in the G1 Darley Prix Morny and G1 Middle Park were truly outstanding and his Champion status at the end of that year was very well deserved.

“The loss of Shamardal in April left a big hole in the roster, but we are confident that his sons, Earthlight and Blue Point, will continue his legacy admirably in Ireland.”. 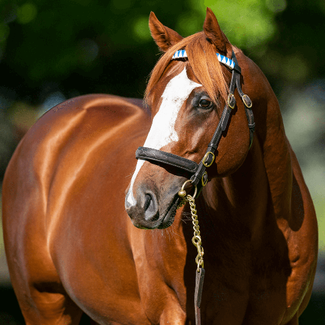