The fifth and final day of Royal Ascot on Saturday, 19 June is headlined by the G1 Diamond Jubilee Stakes, the race won two years ago by young Darley stallion Blue Point (pictured). He became the only horse ever to win three G1 sprints at Royal Ascot, having landed the King’s Stand earlier that week and the year before – a record that still stands today.

The Jersey Stakes was won last year by Night Of Thunder colt Molatham and the leading young sire sees his unbeaten son Storm Damage line up.

Fast Raaj (Iffraaj) travels over from France, where he was last seen winning the G3 Prix Djebel. The rain-softened ground should not present a problem for this progressive colt and should he succeed, he will become the second winner of the race for his sire, following Ribchester in 2016.

Thunderous will bid to continue a good week at the Royal meeting for his sire Night Of Thunder in the G2 Hardwicke Stakes. Thunderous is one of Night Of Thunder’s 17% Stakes winners from his first crop, a figure that cannot be bettered by any other stallion – including Dubawi and Galileo. 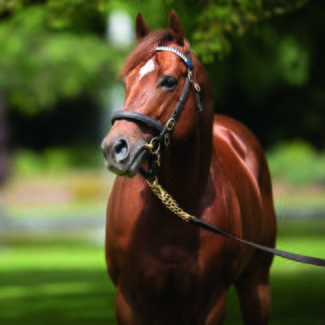