Harry Angel has been enjoying a superb run of success in recent weeks and this continued in style as he recorded a double on Thursday, 15 September.

Glenfinnan became his 14th individual winner when making all to land the one-mile maiden at Great Yarmouth. The Andrew Balding-trained colt picked up impressively when asked with two furlongs left to run and kept on superbly to win by two lengths from the G1-entered Maasai Mara.

Bred by Newstead Breeding, Glenfinnan is out of the Stakes-placed Green Desert mare Fatanah, a half-sister to two G2 winners in Makderah and Oriental Fashion.

Later in the afternoon, the progressive Felix Natalis added a third win to his record with victory in the €100,000 Goffs Sportsman Challenge.

Quickly away under Seamie Heffernan, Tom Dascombe’s charge made all and was comfortably clear at the halfway point. Ridden along inside the final furlong, Felix Natalis showed a good attitude to keep on and win by two lengths. He could well step up to Stakes level in the near future.

Felix Natalis is out of the unraced Dubawi mare Newtown Pippin, herself a daughter of G1 1,000 Guineas third Vista Bella.

Harry Angel is also sire of Marshman, who put up the best performance by a runner by a first-season sire when second in the G2 Gimcrack. He is currently vying for favouritism for the G1 Middle Park Stakes. Harry Angel has another G2 performer in Vicious Harry, plus dual winner Bonny Angel who holds an entry in Saturday’s G3 Firth Of Clyde Fillies’ Stakes. 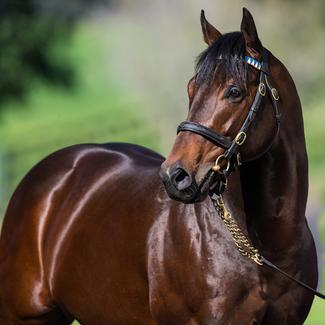